Images, Laughs, and Stories from the Book Signings

The book signings started on Thursday September 10th, and I think I accomplished what I set out to do – give people a different experience at each location while introducing them to some of my favorite people & places.

Not only did people share great stories of what they loved or remembered about the magazines, but we even made history when the head of Orby was reunited with Jerry Vile.

I also have to say the kindness of members of the magazine staffs have been nothing short of amazing. Many have had kind things to say about the book, One staffer even gave me some one of a kind memorabilia with Orby head pins and an ultra-special unworn, limited edition Orbit t-shirt (turquoise on black).

It’s just been an honor to share the book with everyone. Thank you, if you came out.

Here’s a look at the events:

This was the kickoff, and it was packed! Not only were the civilians in the house – fans of the magazines – but, those who have “the 1,000 yard stare” from working at Jerry Vile’s various concerns over the years.

Who came the furthest? That probably belongs to former White Noise co-creator and Fun/Orbit scribe, Paul Zimmerman who came in from an undisclosed location in bone dry California.

The Orbit reunion eventually spilled over to the old Royal Oak haunt Gusoline Alley. That lead to cell phone video of semi-drunk old punkers singing “Perfect Day” by Lou Reed on the street out in front. I won’t share that with you, for the sake of the children.

Lowbrow met high art at the signing at Inner State Gallery in Eastern Market for the closing of Glenn Barr’s Lyric 3 show.

Glenn released a limited edition signed/numbered print of the artwork for the cover of the book as part of the event.

It was great to meet people in the gallery. We found that some of the folks came in later, many wondered in from other events down Gratiot in the Market.

Before the evening was through, Jerry showed up to sign books, catch up with Glenn, and the gallery staff.

Dan & Katie Merritt have a great shop and invited me to bring some folks along to celebrate the book.

One cool thing about the Green Brain event is that you can see original issues of Fun & Orbit in the store’s art gallery through mid October.

Among the issues featured are rare, one was never released, featuring a range of artists such as Glenn Barr, Niagara, Robert Williams, SLAW, Terry Colon, and many more.

I returned to the east side to meet my people on Sunday. I was raised a few miles south of this great store in Mt. Clemens in the little strip mall metropolis known as Clinton Township.

As such, it was great to catch up with family, friends, and hip folks from Macomb County (believe it, there are a few).

Store owners Dave & Lisa have a great records &music/book shop in the heart of downtown Mt. Clemens. I’ve found some great stuff there. You should go there!

This was THE historical event as the book signing became not only a film screening, but a reunion with a long lost member of the Orbit family – Orby himself! 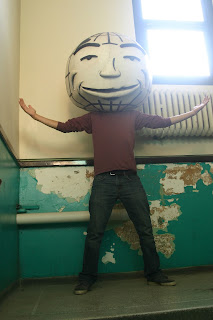 The screening was of Jonathan Demme’s 1981 made for PBS film “Who Am I This Time?” based on a short story by Kurt Vonnegut, Jr. and starring Christopher Walken, Susan Sarandon, and Jerry Vile.

Jerry has a real problem watching himself on screen, makes him uncomfortable, but he was great telling stories after, taking Q&A about how he was cast in the film, what it was like behind the scenes.

Before the film started, the head of Orby was returned by the two men who took off with it from the Orbit magazine wake in 1999. You can read the full story here.

In the meantime, I’m working on trying to find a museum to care for, house, and display Orby’s head since this is his 25th anniversary.

Well, there’s one local event left – this Saturday September 19th from 1-3pm at Detroit Comics. This will be your last to get your copy and meet some great folks in the Detroit area for some time. So, I hope to see you on Saturday afternoon in Ferndale.