Born and raised in a working class, northeast suburb of Detroit, Rob cultivated a love of music, writing, and media at a young age. 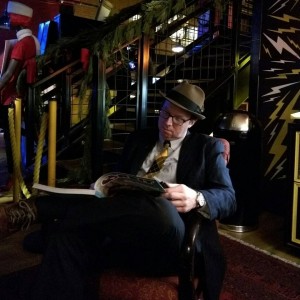 After learning to play guitar at age 14, Rob co-created an underground student newspaper at 17 because he felt the school’s paper was too restrictive. At 19, he produced an independent film, “Tainted” – a vampire/comedy that played at the 1999 Cannes Film Festival and was picked up by Troma Entertainment, the company best known for the cult classic “The Toxic Avenger.”

For over 14 years, Rob worked as radio news professional in Michigan & Colorado. His career started in the newsroom of WJR (Detroit). He later worked at WLEW (Bad Axe), WSGW (Saginaw), WOOD (Grand Rapids), WDET (Detroit), and KAJX (Aspen). He has been honored over two-dozen times for his feature and investigative work by statewide and national journalism organizations.

Rob hosted the “Detours” podcast for the Detroit Free Press (July 2015-October 2016) – a show created by the daily paper’s arts & entertainment department to capture his unique point of view on his hometown and its scene. He is also the former co-host of “The Projection Booth” – a weekly, in-depth film discussion podcast.

Released in early September 2015, “The Orbit Magazine Anthology” is Rob’s first book The four year passion project focused on reprinting and telling the stories related to creation of Orbit, Fun, and White Noise magazines, their eclectic staffs, and prankster ringleader “Jerry Vile” Peterson. The book was selected by the Library of Michigan as one of 20 Michigan Notable Book Award winners for 2016.

Rob lives in Hamtramck with his wife, Erin, and their two cats – Holly & Max.