Rob has authored his own books and taken part in several compilations. 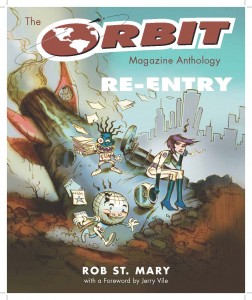 With a mischievous globe-headed mascot that appeared in every issue and even on Quentin Tarantino’s T-shirt in Pulp Fiction, Orbit was an instantly recognizable arbiter of 1990s Detroit culture. But its irreverent tone and unique editorial features could be traced to two earlier local publications from creator Jerry Peterson, a.k.a. Jerry Vile—White Noise (1978–1980) andFun: The Magazine for Swinging Intelectuals [sic] (1986–1990). In The Orbit Magazine Anthology: Re-Entry, author Rob St. Mary details the full run of White Noise, Fun, and Orbit, collecting two decades’ worth of Detroit’s alternative publishing history into an oversized, heavily illustrated volume that situates the publications in the city’s pop culture and media history.

St. Mary shows that while other alternative papers followed a tried-and-true focus on lefty politics and the arts, Vile’s publications found their niche in biting satire and sharp design that fed on popular culture. From the 70s punk scene in White Noise to audacious articles and irreverent “news” in Fun and a blend of reporting, satire, and culture in Orbit, St. Mary shows that Vile’s publications were distinctive in their content and uniquely Detroit in their tone. In sections devoted to each magazine, St. Mary details their recurring features (including dining, movie, and music reviews) and interviews former staffers. Numerous images and page spreads reveal the notable Detroit musicians—like Destroy All Monsters, the Gories, ICP, Jack White, Kid Rock, and Derrick May—and artists—including Niagara, Glenn Barr and Tristan Eaton—that graced their pages.

A foreword by Jerry Vile and an afterword by Ben Blackwell round out this one-of-a-kind volume. Anyone interested in Detroit arts and culture or the history of alternative publishing will be grateful for The Orbit Magazine Anthology.

“Rob St. Mary’s carefully researched look at Orbit and its roots in the Detroit punk scene takes you on a wild ride through the rude, riotous underbelly of local journalism in the 1980s and ’90s.” – Susan Whitall, former Creem editor, Detroit News feature writer, and author of Fever, Little Willie John: A Fast Life, Mysterious Death and the Birth of Soul

“Rob St. Mary knows how to have a good time—plunge into the high life of fun-seekers, artists, ne’er-do-wells, and cult favorites, with a journalist’s precision and a bright pinch of eastside Detroit salt. Let him take you into Orbit!” – Kathe Koja, author of The Bastards’ Paradise, The Mercury Waltz, Under the Poppy, and several others

“When Detroit’s leaders get around to carving the Motor City’s Mt. Rushmore, Jerry Vile should occupy Washington’s spot. The Orbit Magazine Anthology is a compendium of Vile’s two-decade publishing legacy, from the paste-up White Noise music fanzine through the fully developed, hilariously ridiculous Orbit. Vile’s work was disruptive yet sincere in a city that needed such elements in the latter part of the twentieth century. Vile both feted and lampooned locals who deserved it and did it with a disarming, half-ass style that made you unaware of the genius in his journalistic terrorism.”– Steve Miller, author of Detroit Rock City: The Uncensored History of Rock ‘n’ Roll in America’s Loudest City 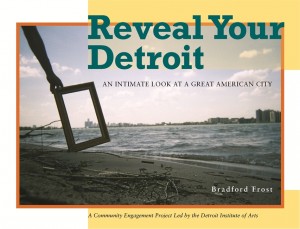 “Through a unique partnership model with forty-five community organizations, the Detroit Institute of Arts 2012 community photography project Reveal Your Detroit offered Detroit residents the chance to respond to the Museum’s contemporary photography exhibition Detroit Revealed: Photographs 2000-2010. Using disposable cameras, each participant captured people, places, and things that make their lives in Detroit distinctive, inspired by the questions “what does your Detroit look like?” and “how do you want others to see it?”. In the final display, over 2,300 images rotated across 60 digital photo frames, from a selection of over 10,000 submitted. For this volume, author Bradford Frost selected 192 images from the exhibit to showcase the perspectives of hundreds of residents and the places they presented, from the gritty to the sublime.

Reveal Your Detroit is composed of two main sections—The Authentic City and Detroit’s Vital Transformation—photo essays that evoke Detroit’s spirited resolve and response to the dominant imagery of the city in decline. Photographers visit favorite Detroit sites like Eastern Market, the Detroit Riverfront, the Charles H. Wright Museum of African American History, Comerica Park, Michigan Central Station, and the Fox Theater; but they also highlight lesser known spots, like the cobblestone streets of West Canfield in Midtown, Hostel Detroit in Corktown, and the Central Business District Community Garden Downtown. Photos highlight Detroit’s vibrant street and folk art, the diversity of the city’s natural environment, and the vitality of residents and businesses in a range of city neighborhoods. The participating community groups are introduced in short text sections throughout the book and credited in the captions of each photo they submitted. Frost concludes with a personal section containing snapshots of a few of his own Detroit highlights.

Reveal Your Detroit is not only a beautiful gift book and record of a transforming American city, it is also a testament to the possibilities of creative partnership between grassroots organizations and larger cultural institutions. Anyone with roots in Detroit or an interest in community-based art will appreciate the multilayered picture created by Reveal Your Detroit.”

Rob contributed photos & an essay on a team of community members who worked with WDET-Detroit Public Radio’s as part of the project. 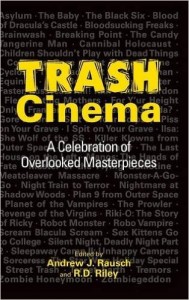 “It is frequently said that one man’s trash is another man’s treasure, and nowhere is this statement more ac curate than in the case of obscure bizarro exploitation films. Containing 55 essays on such trash classics as Ilsa: She Wolf of the SS (1975), I Spit on Your Grave (1978), and Faster, Pussycat! Kill! Kill! (1965), Trash CInema: A Celebration of Overlooked Masterpieces celebrates the good, the bad, and the ugly of these so-called “trash” films. Some of the pieces are reverential, some poke fun at the absurdity of the films, and others offer a more critical eye to these proceedings. With essays from more than 40 noted film writers, this collection is a one-of-a-kind treasure for those amongst us with a passion for the seedier side of cinema.

Rob contributed an analysis of the 1976 film “Blood Sucking Freaks” (aka “The Incredible Torture Show” or “Sardu: Master of the Screaming Virgins”)